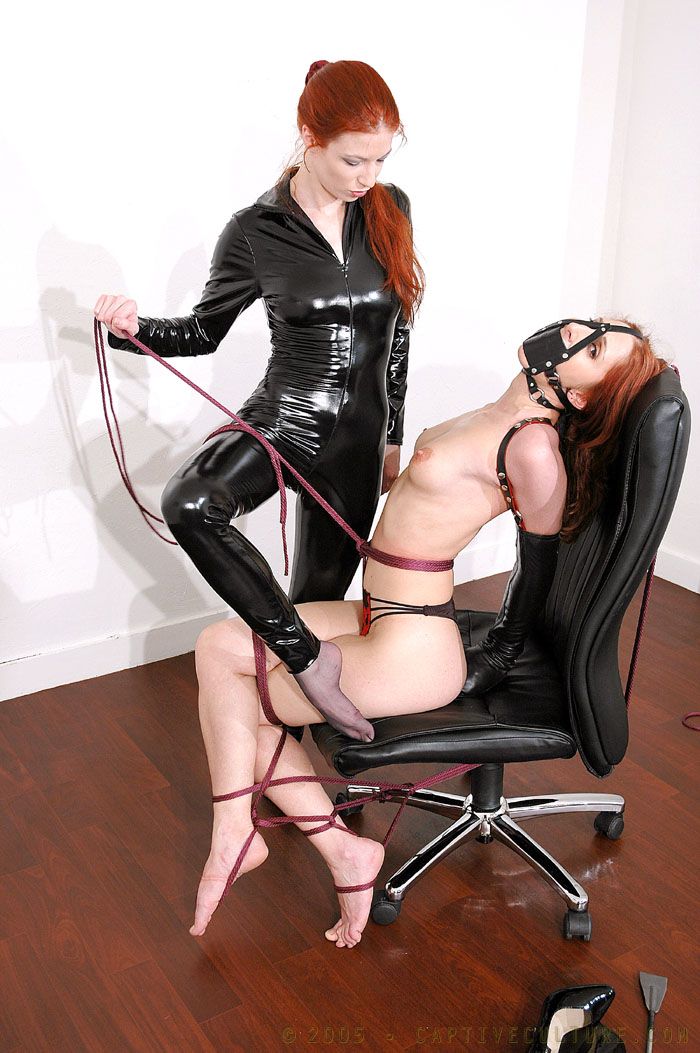 Few days before the 22nd anniversary of Captive Culture, let’s share another session in SD quality like it has been published for members at this period. I think there is no need to explain again that Rachel Paine went to Paris with Michael Viking : we shot together for several days and you have already watched some of these pics & vids. If you need a reminder, I invite you to check my commentary on photo series 186-04 clicking on the related link available after this blog entry. 2005, March 17 : it was our second day of shooting and we mainly shot for my website. I started with our american guest bound in latex before to capture another memorable power exchange session … 24 hours after her first play with Rachel being bound & gagged, Dana was probably aware that her kinky friend would tease her nicely ! But she didn’t expect that Rachel would dominate her body & mind so strongly. From my point of view, Rachel decided to test and push the limits of Dana after their first time together. Rachel was an expert and Dana wasn’t used to be treated like this … and she loved it ! Let’s talk about the setup : I used that amazing leather single-glove made by Ledermeister which traveled overseas in Rachel’s suitcase. Dana started the session with her tight elbows in the back trapped in this armbinder … it was tied to one length of nylon rope teasing the crotch of Dana and taking her tiny waist. I decided to bind Dana on my office chair to let Rachel turn around and play with her french partner. As you can see on the preview picture, Rachel was wearing one PVC catsuit from her own collection of fetish outfits. She already played with the nipples of Dana one day before but, this time, there was no nylon bodystocking between these sensitive breast and the hands of Rachel. She pinched and twisted Dana’s tits many times and found a playful way to dominate the french woman. Dana was used to say that she was a noisy girl and it was true. Rachel already noticed it and she loved to play with Dana and make her moan ! That’s why I said that Rachel played with the body & mind of Dana : we didn’t only capture the delicious pain of a long nipple play session. We watched Rachel exploring and pushing the limits of Dana who was trained to moan by the dominant lady that she called “Mistress” … no need to say that Rachel enjoyed her reaction and didn’t stop to challenge Dana with some others games. Like an expert, Rachel used the riding crop on these lovely boobs … she knew how to mix pain and pleasure to get more from the submissive girl. Sometimes, Dana was getting one small reward being licked : Rachel loves to play with her tongue and that’s something that Dana learned during this session. She also discovered the unique feeling of a muzzle gag harness … Rachel brought this wonderful piece of leather and Dana quickly understood that the level of constraint would be higher than ever. I think you will like to watch her reaction recorded on video : the body language on this sequence reveals a lot of informations about her state of mind. I wanted to create and capture this kind of situation since I started to shoot my own pics & vids. We shot many sessions and explored a lot of fantasies but, that day, I got the feeling to reach one of my goals shooting with our american friends. After these 4 days together, it was clear for me that I have to follow this way … it confirmed some choices and helped to do more changes during this pivotal period started in the last quarter of year 2004. I would say each of those sessions with Rachel & Dana brought something essential : that’s difficult to explain but it was looking more real, there was a mutual attraction, I wouldn’t say a sexual tension, but it was more sensual and erotic than usual. It made me think a lot about my productions and this experience of several days has been a new start for my work … if I have been able to create and capture some intimate memories later with some others girls, that’s because I understood the things to do and the ones to avoid. Watching Rachel teasing the crotch of Dana with her foot while she was bound, gagged and pinched has been a lovely scene that I captured on video thinking this should happen more often in front of my lens. After this, I never stopped to think my sessions should be more intense and that’s the path I tried to follow with these girls who accepted to live this experience … I hope that you will like those SD pictures which have not been remastered like a lot of our old sessions. My photography could have been better, that’s a sure thing, but forget about the quality and focus your eyes on the beauty of those two ladies … Rachel is perfect as the Mistress dominating Dana gagged and pushed to explore her submissive side. As usual, click on the download icon to watch those pictures, unzip the archive on your device and have a nice time. 4 video files have been included to this session + 2 behind the scenes recorded before Dana was gagged and after the last scene, while she got released … enjoy !