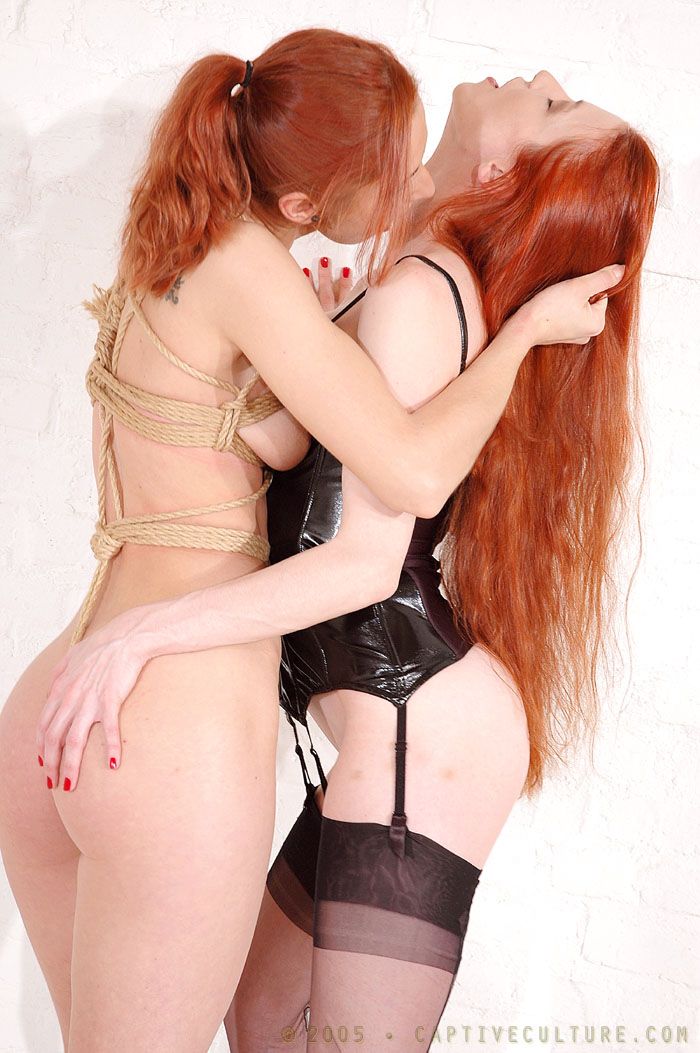 2005, March 19 : after a small break of 24 hours, our american guest came back at home to model with the french girl. Rachel and Dana started this shooting day with another couple bondage session before we shot this photo series reposted today like it has been published on Captive Culture … 17 years ago ! / DISCLAIMER – PLEASE READ / No need to explain that digital photography and internet connection were really different than nowadays. It’s easy today to shoot and spread high quality pictures but, before, we had to deal with some limitations. When I started this blog, the goal was to bring back the best of my productions online. 128 photo series have been shared since 2017, mainly shot afer year 2006, when I started to publish HQ pics & vids on my websites. At this period, I remastered some of my favorites without being able to do it for all my content. Some of those sessions were good but I skipped them because it was too much work for a single man. Since the beginning of this blog, I think about the best way to share those memories. Recently, I understood it would be impossible to do it properly. If I could, I would like to remaster all my pics & vids but, like in the past, I can’t do this. So, one category called “sessions” has been created several months ago to avoid any confusion between my HQ photo series and those SD archives that my fans would like to watch. That’s not perfect but I will be able to share more pics & vids into this section of the blog. Please, don’t expect the best quality and focus your mind on the best part of my work … the beauty of my models and those memories we share together. You will get more pics inside the SD archive because I was used to publish almost every shot captured during the session. As explained several times, my photography enhanced through the years and I could also mention the evolution of my rope skills or photoshop editing. In one word, you will see something different from my others photo series. I did many mistakes as photographer including some weird angles or bad framing but I prefered to show most of the session. You will like it or not, I don’t know. Please tell me what you think leaving a comment below / END OF DISCLAIMER / … sorry for this but it was necessary to introduce this new feature. Back to the session now : we wanted to explore the idea of a tied girl who was totally naked and one woman dressed with some lingerie and nylon stockings. My assistant, Alain, got the pleasure to shoot Rachel alone before Dana joined her … interesting contrast between the nudity of Dana partially bound and Rachel free to play with Dana. I think she was already pleased by the ropes nicely teasing her breast, waist and crotch ! After a while beside a white wall, Dana has been immobilized on my leather office chair. Then, Rachel never stopped to explore the body of her french friend. As explained previously, there was a mutual attraction between the two girls since the beginning and it was still strong on this third day of shooting. Rachel followed my instructions and started with a massage before to kiss and lick the feet of Dana Carlier. No need to say we got those fetish pictures that we wanted to catch : after this step, Dana got more ropes and the feeling of restraint increased with a ball-gag harness. Rachel has gagged her mouth several times during the previous days : Dana was looking totally comfortable, maybe because our american guest was also into a submissive mood that afternoon. When Dana has been totally bound and gagged, we started the last scene … Rachel cleaned the feet of Dana with her tongue again but, this time, her elbows were tight in the back. One beautiful position obtained with the amazing single-glove made by Ledermeister which has been brought by Rachel & Michael. Of course, we captured the situation from any possible angle. Please note the B&W pictures included into the archive have been shot by Michael Viking. We took all the time needed to shoot those two tied girls playing together. I let you imagine how sexy was Rachel exposing her pussy to the camera while she was licking the feet of Dana. As expected, we got the chance to record that memorable moment on video : Rachel Paine restrained with the armbinder while Dana was bound and gagged. After this, we untied the french girl shooting more behind the scenes pics & vids for you. I will also share those memories on the blog. You should enjoy to watch the face of Dana in the end … her eyes were sparkling and we all know what it means. For the little story, after this photo series, we shot another set in the classroom with Rachel as the schoolgirl : Dana got the pleasure to dominate and spank our american guest. She was strongly waiting for this moment after three days being an obedient submissive ! As usual, click on the download icon to watch those pictures, unzip the archive on your device and have a nice time. 3 video files have been also included to this session … enjoy !