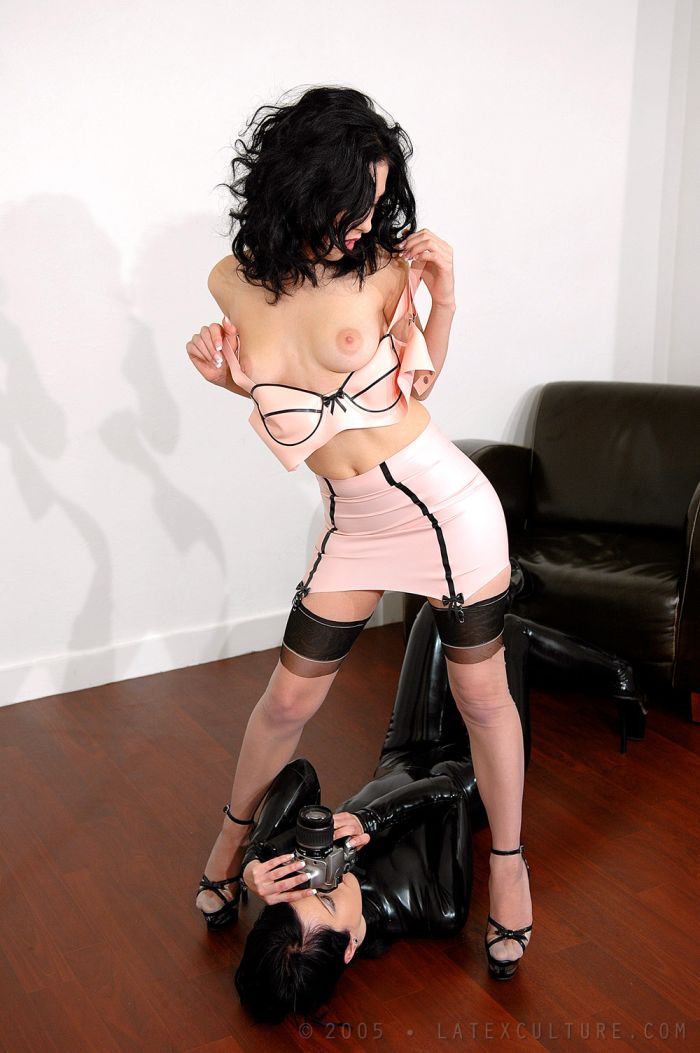 Let’s share one photo series focused on latex fetish and glamour pin-up shot in 2005 … I don’t remember how came this idea but we decided to play with Diva modeling for Mina dressed with a catsuit. Oh, yes, no mistake, the hair of Mina are not red and she doesn’t wear a wig this time. Before to start her trip to Paris, she proposed me to dye her hair in black because her usual red was a little bit too bright but me. So, during this week-end, we did several photo series with Mina looking different ! We started the afternoon by one damsel in distress session before to associate Mina to Diva who was my model’s assistant that day. I think it was the first time she modeled together and maybe the only one. Diva did the make-up of Mina before to prepare herself while we were working on the bondage photo set. I already mentioned this fact but Dana stopped to be my assistant during the summer and I was trying to find a way to replace her proposing the job to Diva. She did it for several sessions before that Anaïs officially became my right hand. I had the feeling it would be better like this. This kind of choice is never easy to do. I always tried to follow one kind of hierarchy among my models : Diva was there before Anaïs then I tried to involve the french pin-up in my production process. I was expecting this specific status would bring more motivation to Diva but it didn’t work. Anyway, I simply wanted to explain the context of this shooting day … we tried to simulate the atmosphere of a photo session using one spotlight with an umbrella in the background. Alain also appears keeping a light deflector while Mina is using his camera. Do you remember my previous commentary talking about the Canon 300D that I bought before to get a Nikon D70 ? When I explained to Alain that my initial choice was a mistake, he was kind enough to buy me back this camera that he discovered during one bondage session … and we used it for this photo series with Mina as the fetish photographer. I thought interesting to dress Mina with a catsuit because it was suggesting that she loved it enough to wear latex even for shooting. There is not a lot of things to write about this photo series : the action is a seduction game between the photographer and her model … there are some good pics even if my photography could have been better but you already know that speech ! However, I really like the last shots showing a lovely point of view as suggested by the preview image. Like Mina, I went on the floor between these nice legs to capture the beauty of this angle : DSC 9660 is still one of my favorite pictures after all these years. I am happy to start one special month for me sharing this photo series … are you ready to celebrate the 22th anniversary of Captive Culture ? I will try to post some nice things within the next weeks … you should follow me on twitter to stay tuned ! After this duo session, we moved to the bedroom and shot Mina bound and naked on my satin sheets but that’s another story which will be added soon to the blog. As usual, click on the download icon, unzip the archive on your device and have a nice time. I hope that you will like to watch these pictures of Diva & Mina !